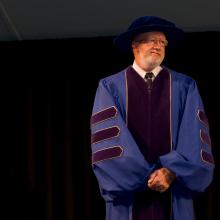 Bob Skene has had a distinguished business career paired with an active role serving the community. He has lived in Victoria since 1979 after moving to Vancouver Island from Ottawa where he was chief operating officer at Computel Systems Ltd. for 10 years.

From 2000-2007, Skene was a member of the Royal Roads University Board of Governors and later became Chancellor and Chairman of the Board. He also volunteered to serve as acting president of the university from April 2006 until April 2007.

Skene was senior vice-president, business and development and chief financial officer with WCG International Ltd. from 2000 – 2005 and, for 10 years prior to that, chief executive officer at the Vancouver Island Advanced Technology Centre (VIATeC). From 1984 to 1990, he was chairman, president and CEO for HTS Hi-Tech Systems Ltd.

A chartered accountant, Skene also holds a Bachelor of Commerce from the University of British Columbia. He was president of the Greater Victoria Chamber of Commerce in 1989 and served as chair of the Victoria Airport Authority’s audit and finance committee for four years. Skene spent four years as treasurer and chair of the Greater Victoria Hospital Society’s Operations Committee and has served on numerous other boards of directors in a leadership role including the Silver Threads Society, the Association for Community Living and the Camosun Gyro Club.

Bob Skene has been happily married to Judy for 45 years and has three children and eight grandchildren.

In a career spanning more than 35 years, Bob Skene has exemplified always a commitment to excellence that goes beyond the boardroom and into the community-at-large. He is an exceptional leader with a distinguished financial management career and an outstanding reputation for bringing business growth to the high-tech sector. Bob Skene is also a devoted husband, father and grandfather known for his integrity, intelligence and willingness to volunteer for a good cause.

As president, Bob Skene was instrumental in strengthening the university’s relationships with its landlord, the Department of National Defence, as well as with local First Nations and Royal Roads Military College graduates.

In 2008, Bob Skene assumed another influential and pivotal role at Royal Roads. He is co-chairing the university’s Legacy Campaign, its first-ever major fundraising initiative and one that aims to attract $100 million from the public and private sectors. In addition, he co-chairs one of the campaign’s regional committees and is a major donor himself.

Bob Skene moved to Victoria in 1979 after 10 years as chief operating officer at Computel Systems Ltd. in Ottawa. He was senior vice-president, business development and chief financial officer with WCG International Ltd. from 2000 until retirement – of sorts – in 2005. In between, Bob Skene made enormous contributions to the high tech sector, including 10 years as CEO of the Vancouver Island Advanced Technology Center and five years as Vice-President of Finance and Administration with BC Systems, a Crown Corporation responsible for providing data processing and software development services to all B.C. government ministries.

When the B.C. government elected to privatize BC Systems in 1983, Bob Skene secured a contract to manage all data center operations and helped 120 provincial employees transfer to HTS, an employee-owned private sector company.

Bob Skene is a tireless and giving community leader who has served on, and at times led, a number of local boards supporting both business and humanitarian ends. These include the Greater Victoria Chamber of Commerce, the Victoria Airport Authority, the Greater Victoria Hospital Society, the Silver Threads Society, the Association for Community Living, the Jericho Hill Legacy Trust and the Camosun Gyro Club.

Through his generosity and devotion to leadership, entrepreneurship and community service, Bob Skene actively demonstrates every day the traits that RRU holds dear.

Mr. Chancellor, it is indeed an honour to present Bob Skene for the degree, Doctorate of Laws, honoris causa.