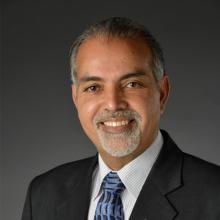 Barjinder (Barj) Dhahan is a social entrepreneur and visionary who believes business plays a fundamental role in creating economic and social prosperity for everyone. Through his work and charities, Dhahan tirelessly supports equality, education and health care around the world.

Dhahan emigrated from India with his family when he was 10 years old. He started working at age 14 and by 22 had leased his first gas station. Two years later, he launched a venture that would become the Sandhurst Group of companies, which includes convenience centres, food services and commercial real estate in British Columbia. Today, Dhahan is one of the leading Esso dealers and most successful Tim Hortons franchise owners in BC.

Dhahan connects people and ideas to support inclusive social prosperity. He has been the driving force behind numerous national and international health, development and education programs to promote change and wellness at home and abroad.

Dhahan launched a bursary for BC high school graduates in 1991. Since then, the Sandhurst Group has awarded more than 40 bursaries to students who demonstrate financial need and academic achievement. Together with his family, he created a life skills program to support students with disabilities at his former high school in Vancouver, and in 2016 he helped create a $400,000 fund for Indigenous students at the University of British Columbia. Dhahan also supports education in his community with his time. He has served as a board member or council advisor for various universities in BC, including as a former board member for Royal Roads University, where he continues to serve on the Fellows Council.

One of his passions is for connecting people from diverse backgrounds to build caring and inclusive communities in Canada and India. He is co-founder and director of the Canada India Education Society (CIES), which supports education, community development, health care and job creation in India. In partnership with the University of British Columbia’s School of Nursing and Guru Nanak College of Nursing in Punjab, he helped launch a collaborative nursing program for Indian women, which boasts more than 2,000 graduates. He is the board chair of IC-IMPACTS, a pan-Canadian research centre dedicated to finding community-based solutions for development challenges in Canada and India, and the past chair of the Canada India Foundation, a Canadian non-profit organization created to improve bilateral relations between India and Canada.

In 2013, he established the Dhahan Prize for Punjabi Literature, the world’s first Punjabi prize for fiction. The $25,000 prize preserves and shares Punjabi stories and history while inspiring emerging authors to share their stories.

Dhahan holds a Bachelor of Arts in Sociology and History from the University of British Columbia (1983) and a Diploma in Theological Studies from Regent College (1985). His accolades include a Writers International Network Community Ambassador Award, a UBC Global Nursing Partnership Award and a Queen Elizabeth II Diamond Jubilee Medal, and he has been featured on the India Abroad Power List.